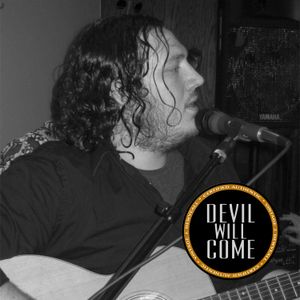 Back pockets exist for days like today. My schedule has been very hectic over the past few months and, sadly, the free monthly music blog has not been getting the attention I would prefer to give it. Still, I'm really trying to finish out the year strong. So this month, I'm reaching into my back pocket and pulling out a little something from the past.

Last month, I was digging through some old burned CDs and came across an acoustic demo that I made at my friend Jon's apartment in Pearland, TX. He had recently bought a digital recorder, a step up from the 4-track cassette that we were using up until that point, and I came over to record a few songs - just to check it out. (I mean, it recorded "straight" to mp3 - what was this magic?)

Several of the songs on the CD were ones that ended up being officially recorded on my first album. There was a handful that didn't make the cut and one or two that I didn't even remember writing in the first place. I think that's when you know you've been writing for a long time - when you can't even remember everything you've created.

And that brings us to this month's song, Devil Will Come. It's one of the earlier songs that I wrote and a staple of the initial sets I would play when I first started performing my own music in front of audiences. For better or worse, it never made it onto any official recordings. Then, as I started writing and playing more, the song slowly slipped out of the setlist and was all but forgotten. Listening to it again gave me a warm and fuzzy feeling. It brought back so many good memories of playing music in Houston with all of my friends - Jon, Richard, Merlin, and more.

Some of you may remember those days and those people, possibly even this song. Of course, many of you joined me on this adventure long after and will be hearing Devil Will Come for the first time. Honestly, it's not the greatest thing I've ever written. I don't have some sort of emotional attachment to it lyrically. It simply reminds me of those first few years, when I wasn't trying to make money or build a following, just making music for the love of creating.

Honestly, that's been the spirit of this music blog too. I've rediscovered so much creativity since starting this and I've enjoyed it immensely. That isn't to say I don't care about making a living with music anymore, or building musical relationships with more people. I would love to have as many people as possible be a part of this with me. But these monthly songs have allowed me to follow the creativity wherever it may lead and that in itself is one hell of a reward.